Broken systems often endure until the light of truth shines unflinchingly upon them.

Armed with the truth, we can take action to effect real change. In the case of the Commonwealth’s Department of Children and Families (DCF), we believe myths have served as a smokescreen behind which a failing system persists—much to the detriment of the thousands of children in its care.

Sadly, within this system, many skilled professionals, from social workers to administrators, toil relentlessly despite the pervasive systemic failures that thwart their ability to effectively help the children for whom they are responsible. These dedicated adults suffer, too.

Myths about child welfare in Massachusetts are dangerous for the young people involved with DCF—dangerous because their very lives, physical safety, and mental health are at stake. We have fallen into a terrible cycle of periodic reaction to child deaths and repetitive and ineffective solutions, as Friends of Children has starkly chronicled in Failing Our Kids: Measures of the Broken Child Welfare System in Massachusetts.

“If we truly matter, why doesn’t the state treat us better?”

Young adult who recently aged out of MA foster care

In the case of the myths surrounding the child welfare oversight system in Massachusetts, the first significant myth begins with the children themselves:

And yet, despite these staggering numbers … our children have no money, no seats at the tables of our corporate boardrooms or legislative chambers, and no vote.  They are voiceless. From time to time, a figurehead group, a documentary, or a newspaper article will make their situations known, and yet, the day-to-day reality—as they struggle to stay well in our broken system—is that they are utterly dependent upon us to help them.

To understand the remaining myths about child welfare in Massachusetts, see a visual depiction below of the current formal oversight of the MA child welfare system.

What follows may at first glance look like a functional system with oversight through checks and balances. It is not. Take a look at the diagram, and then read the Myths beneath it.

The Myths may completely upend what you thought you knew about the care of our most vulnerable children. 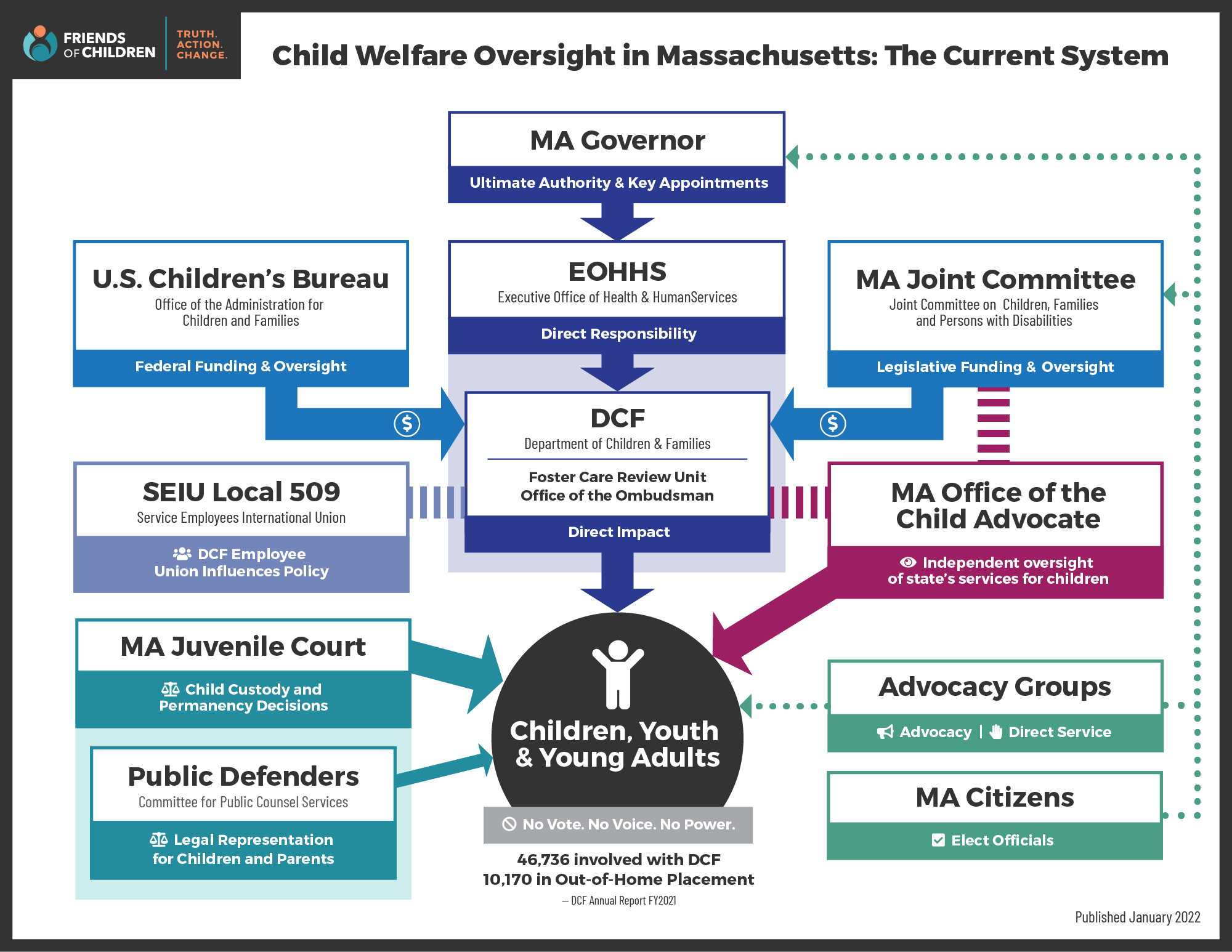 Now that you’ve glanced at a visual depiction of the current MA child welfare oversight system, read on.

Shattering myths, we can see the truth.

The Governor appoints the Secretary of EOHHS.

The Governor appoints the DCF Commissioner.

The Governor, in agreement with the Attorney General and the State Auditor, also appoints the Child Advocate.

The Governor appoints Juvenile Court judges, who serve with no limit other than mandatory retirement at age 70.

Apart from the Governor and EOHHS, in practice, other apparent accountability mechanisms for DCF have no authority over DCF.

The Office of the Child Advocate Provides Independent Oversight of DCF

The Office of the Child Advocate (OCA) holds oversight responsibility to make certain that agencies serving children are fulfilling their obligations--namely, to ensure that children and youth served by the child welfare system receive timely, safe, and effective services, and to safeguard their health, safety, and well-being (OCA website).

The law establishing the OCA is very specific regarding the office’s duties to ensure, examine, investigate, review, report, provide recommendations, and receive complaints. This is a tall order.  We believe this law creates a watchdog function. The law does not ask the OCA to be directly involved in or to oversee operations, which are the responsibility of the respective Agencies. OCA issues reports as a form of accountability, but there is no enforcement arm.

We must ask how the OCA can serve in its intended independent oversight and watchdog function:

We believe the OCA, which was established as an oversight office, must prioritize  the status of children and youth in DCF care.

Given that the limited data that do exist indicate that many children and youth are worse off after involvement in the state’s child welfare system, why isn’t the OCA laser-focused on outcomes and accountability?

For example, only two well-being measures for children and youth are currently reported by DCF:

DCF’s target is for 67% of youth in DCF care to graduate from high school in four years. DCF’s four-year graduation rate was reported as 50.6% in 2021 (DCF Annual Report FY2021).  By comparison, the statewide rate for all students graduating in four years was 89% for 2021.

Although the charter for The Joint Committee on Children, Families, and Persons with Disabilities of the Commonwealth’s Legislature states that it “oversees” DCF, in actuality, the Committee has limited power or authority over DCF, other than budget allocation and the passage of laws.

The Legislature has increased the DCF budget significantly over years of DCF reforms (from $743 million in 2011 to more than $1.1 billion in 2022), yet MA continues to perform poorly on critical measures (as reported in Failing Our Kids), and we still lack many important outcome measures about the well-being of children and youth impacted by the child welfare system.

After the 2020 death of David Almond, 14, at the hands of his father and his father’s girlfriend, the Office of the Child Advocate Investigative Report indicated significant and systemic operational dysfunction at DCF – yet these same problems have been outlined in reports over many years and were supposedly previously addressed with policy changes, operational expansions, and budget increases.

In 2018, the Legislature established a Child Welfare Data Task Force (MA FY2018 budget Chapter 47, Section 128) with a clear list of goals related to data, information, reporting, and outcome measures. This Commission was chaired by the OCA and did not include critical community voices on racial equity, the harmful and dangerous experiences of DCF-involved LGBTQ youth (MA Commission on LGBTQ Youth Report), and disability rights. The Data Task Force  dissolved in February 2022 without completing critical components of its mandate.  For many years, prior to the establishment of the Data Task Force, DCF did not meet reporting requirements that were established by state budget language and enacted state laws. There were no repercussions.

It is unclear to us how the Legislature is measuring the compliance, effectiveness, or impact of budget increases to DCF and OCA and other child welfare requirements mandated by law.

In Massachusetts, the child welfare Ombudsman, who is not publicly named, is an employee of DCF—the very agency the Ombudsman is charged with investigating for complaint reports.

According to the U.S. Ombudsman Association, which is referenced by the National Conference of State Legislatures, an ombudsman is defined as "an independent impartial public offical with authority and responsibility to receive, investigate, or informally address complaints about government actions."

The DCF’s home page does not have an Ombudsman tab, and one must click on a “questions about a case” tab to find Ombudsman information. No data or information are reported regarding complaints to the Ombudsman or their resolution.

We believe the current situation violates both transparency and the expected impartiality of the role.

Unlike most other states, in Massachusetts, foster care review, which is a federally mandated a check and balance on DCF, is actually conducted by an internal department of DCF. The state currently budgets more than $4.5 million for foster care review (MA FY2022 budget, line item 4800-0025).  DCF’s foster care review budget is larger than the OCA budget for FY2022 (line item 0930-0100).  We believe that funding can be more effectively utilized to fund a process independent of DCF and EOHHS.

The Office of the Child Advocate has continuously challenged independent foster care review without clear and publicly explained opposition.

An external and independent foster care review provides an opportunity to objectively assess, report, and make recommendations to all relevant stakeholders regarding the well-being and best interests of DCF-involved children and youth.

Without any official oversight role over child welfare in Massachusetts, SEIU local 509, which represents DCF social workers, holds heavy sway over DCF policies, procedures, and operations. While professional organizations certainly have a part to play in protecting workers, SEIU local 509 must be recognized as the strong EOHHS and DCF influencer that it truly is.

MA Juvenile Court judges make decisions regarding custody of children and youth, termination of parental rights, adoption, and guardianship. However, due to several MA Supreme Judicial Court cases, the legal standard to overcome DCF’s decisions is very high, and Juvenile Court Judges in MA have a limited check on DCF’s actions.

Judges appoint attorneys (public defenders) to represent children, youth, and parents when the Court has granted custody to DCF. The juvenile courts suffer from a dearth of public defenders. Further, many concerns exist regarding the quality of the defense and support children and families receive from their assigned attorneys–and the timeliness of required hearings.

Although the federal government provides funding, collects and reports data, and conducts periodic reviews of how DCF functions (Child and Families Services Review), the only remedies imposed in response to these periodic reviews are performance improvement plans.

In terms of the ability to take strong action to improve state-level child welfare, we have not seen the federal government intervene.

Someone Else Will Fix This

Thinking about child welfare can be painful. The individual stories, and the stories most likely to hit the news, can be disturbing. And the current system, which is complicated, is badly broken. For each of the extreme cases that garner media attention, including child deaths, many thousands of unnamed children suffer in situations that will never see the light of public scrutiny.

We need to understand that, as citizens of the state, the Department of Children and Families represents each of us in the care of our vulnerable children. DCF is our proxy, and we are responsible.

Each of us must take action to make life better for the thousands of children affected by the child welfare system in Massachusetts. If not us, then who? If not now, then when?

We cannot do right by the children, youth, and families we force into this system unless we demand these basic components of an adequately functioning system. Anything less than a child welfare system with adequate oversight, transparency, and accountability is a violation of human rights and social justice.

We must take action.

In the long term, we recognize the need to fully examine and redesign the Commonwealth’s child welfare system.

In the short term, we propose a number of actions that can be implemented:

Here’s what you can do

Consider speaking out if you have actual experience with the system as a former DCF-involved child or young adult, parent, foster parent, or DCF worker.

Share this page with others, including through social media.

Share directly from your browser or simply copy and paste the link into a post with your own words on why this is important to you and the children of Massachusetts.

Learn more about our work to improve child welfare in Massachusetts

Failing Our Kids: Measures of the Broken Child Welfare System in Massachusetts

Oversight: Reforming Foster-Care Review Through Independence from the Department of Children and Families (DCF)

Join our network of volunteers and professionals working to pass important legislation to improve the lives of children and youth in the foster care system in Massachusetts.

Join our network of volunteers and professionals working to pass important legislation to improve the lives of children and youth in the foster care system in Massachusetts.